Treasure in the Arizona Mountains 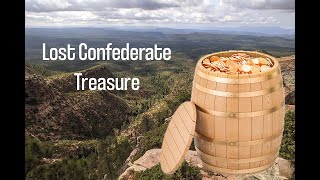 This video was made after hunting for a treasure from a story that was told to me by an old guy named John, who I mention in my book Random Tangents.
We will take you up on the Mogollon Rim, above Payson, Arizona, and tell the story and discuss where I have searched and where I still think the treasure could be.
The story takes place at the end of the civil war when two confederate soldiers stole a wagon and loaded 16 kegs of gold coins from a cache that was buried by the Confederate Army. Making their way across Arizona to join up with some Confederate sympathizers in California they were attacked by an Indian war party.
They headed into the mountains and buried the 16 kegs of coins before being killed by the Indians.
Years later, in 1935, two Mexican fellows hunting close to the Mogollon Rim Road happened to find the kegs only taking a few of the coins before covering them over again. Unfortunate circumstances kept them from ever coming back but one of them finally told the story 35 years later. Follow along with me as I attempt to find the treasure.

For more treasure stories you may enjoy my book, “Random Tangents: Embracing Adventures in Life”: https://www.desertroamerpress.com/

Scroll To Top
We use cookies to ensure that we give you the best experience on our website. If you continue to use this site we will assume that you are happy with it.Ok