The owner of the Crandall Canyon Mine in Utah, where six miners remain trapped, gave journalists a t 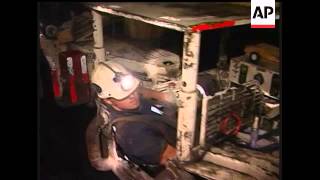 (9 Aug 2007) HEADLINE: A tour inside the Utah mine
utah-mine-collapse
CAPTION: The owner of the Crandall Canyon Mine in Utah, where six miners remain trapped, gave journalists a tour inside the mine Wednesday. (Aug. 9)
[Notes:ANCHOR VOICE]
Wednesday — mine owner Robert Murray – took a small group of reporters on a tour inside the mine ..
The entrance — a forbidding darkness …
Once inside — the group is led to a briefing area where miners put their names on a multicolored board.
SOT:
The group gets told how much safety training miners get
SOT: safety seminar once or twice a year
And get a chance to try the safety equipment each miner carries.
SOT: you get mouth nose eyes, it will save your life
Soon after, they’re met by the mine owner who explains what the group will see on the trip into the mountain.
SOT: we’ll shut down the operation for just minutes .. So you can get a picture.
From there the group gets into pickup trucks .. For a dark drive downward ..
SOT: nats todd, we’re getting pretty close —
The ceiling gets lower the farther the group heads in.
SOT: pretty low todd, 2-inches there.
After more driving .. A stop. Murray explains how things work down here.
SOT: first you notice how we support the roof, we call this wire mesh —
SOT: and the stoppings are used to separate forces of air ..
SOT: when the concussion occurred from the earthquake — it blew out these stopping all through the mine
At one point — a vehicle carrying equipment toward the rescue operation passes by.
SOT: nats of motor
Murray points out some of the work crews are now doing to support the mine shafts from seismic activity ..
SOT: bolt it in here so we can continue the rescue effort.
Finally, Murray leads the group to where the cave-in separates the rescuers, from the trapped miners.
SOT: where the damage is here, we’re about 2-thousand feet deep.
Here, it’s a bee-hive of activity in the frantic rescue effort.
SOT: nats
SOT: nats of Murray .. And then they start they’re drilling effort.
SOT: nats of machines ..
As machines here churn up debris in an effort to clear the cave-in. It’s here that Murray also has hope.
SOT: two things I want you to notice, very positive .. Number one the roof is in perfect condition. Second thing, Look at the amount of venthilation going through here. If the stoppings .. Then a lot of this will keep them alive .. And all they need is air, until we can get to them.
But in the meantime — the digging …
the drilling …
and the desperate effort to make contact with the miners — continues.
The Associated Press.