Mines Like This Aren't Supposed To Be In California 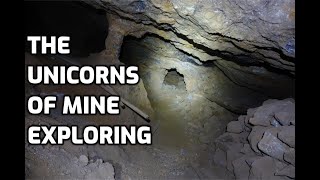 The title of this video is a nod to those that say that all of the abandoned mines in Southern California have been sealed up by the government or plundered by “collectors” to the point that they are just featureless holes in the ground… They have not. And the impressive mine in this video is proof of that, despite abandoned mines like this not supposedly not existing in Southern California anymore. These abandoned mines are not unicorns. They are still out there. Yes, one must work much harder to find them now in such places, but they are still out there. We can only marvel at the golden age of mine exploring in the 1960s, 1970s and 1980s when such abandoned mines were everywhere…

For a mine of this size, there is surprisingly little information available on it. Part of this is due to the fact that, unlike states such as Nevada or Arizona that have digitized their archives and made them available to the public, California has done nothing with their historical archives other than make them extremely difficult to access. Many of them are in Sacramento, but others are scattered across the state and one must be credentialed to simply review them in many instances. Naturally, even if any of them have been digitized, none of these have been made widely accessible to the public. It’s California. What can I say?

However, even with the obstacles presented by the Golden State taken into account, there is still surprisingly little information available on this mine. Once you’ve seen how large and impressive this mine is, I think you’ll agree that that is somewhat odd.

What I have uncovered seems to indicate that this was primarily a lead and silver mine, with copper, gold and zinc also being present in small, but rich quantities. Works appears to have started in the early 1900s and continued into the 1950s.

Credit for the discovery of this site goes to Mine Explorers (https://www.youtube.com/channel/UCxhNU-gNyPq2lXA7JhLB90Q)

All of these videos are uploaded in HD, so I’d encourage you to adjust your settings to the highest quality if it is not done automatically.

You can see the gear that I use for mine exploring here: https://bit.ly/2wqcBDD

As well as a small gear update here: https://bit.ly/2p6Jip6

You can see the full TVR Exploring playlist of abandoned mines here: https://goo.gl/TEKq9L

Growing up in California’s “Gold Rush Country” made it easy to take all of the history around us for granted. However, abandoned mine sites have a lot working against them – nature, vandals, scrappers and various government agencies… The old prospectors and miners that used to roam our lonely mountains and toil away deep underground are disappearing quickly as well.

These losses finally caught our attention and we felt compelled to make an effort to document as many of the ghost towns and abandoned mines that we could before that colorful niche of our history is gone forever. But, you know what? We enjoy doing it! This is exploring history firsthand – bushwhacking down steep canyons and over rough mountains, figuring out the techniques the miners used and the equipment they worked with, seeing the innovations they came up with, discovering lost mines that no one has been in for a century, wandering through ghost towns where the only sound is the wind… These journeys allow a feeling of connection to a time when the world was a very different place. And I’d love to think that in some small way we are paying tribute to those hardy miners that worked these mines before we were even born.

So, yes, in short, we are adit addicts… I hope you’ll join us on these adventures!