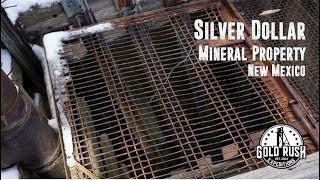 The Silver Dollar mine is a historic Gold and Silver mining claim that dates back to 1894-1895. The mines have been worked over the years on a small scale. The largest developments in 1900 when a double battery stamp and gravity mill was installed and again in 1939 when a leach type mill was established at the site. The Mine was again worked in the 1950’s and 1960’s and produced a “good living” for the owners (oral communications). There was never any production officially reported from the mine, which only indicates that the owners kept recoveries private. Its inconceivable to build mills and process on site if there is no recovery.

The Silver Dollar Mine resides in the western Burro Mountains and is located in what is locally known as the “Golden Halo”. The Golden Halo is an area of mineralization emanating in a circular pattern from the massive Tyrone Copper Mine. The Tyrone, while a documented copper mine, is no slouch in the gold department boasting over 1,000,000 ounces of gold produced up to 1986.

The Silver Dollar has limited history and its spotty at that. The mine is reached by an offshoot road that breaks from another small branch road. The mine is a reported 160’ in depth with various cross cut drifts. Based on waste dumps and remaining tailings, surveyors estimate there are roughly 1500’ of total workings.

The mine resides in a general gold trend that has had pockets of gold developed with values of over 100 ounces/Ton in Gold. (Osmer, Foster).