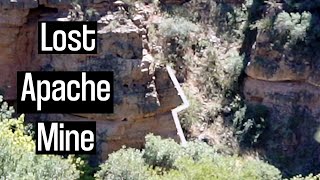 The story of Geronimo’s Hidden Mine with treasures of untold wealth is a story that Geronimo told his army captors about. He would not tell them the location without being released so he could make an escape.
Part of the story goes that the mine lies under the nose of a rock outcropping that is in the shape of an Apache warrior.
Two old prospectors and treasure hunters actually found the rock face and the entry to the mine around the 1950’s. Shortly after they found it their house burnt down and they didn’t make it back again.
Later they told the story to a fellow named Dick, who my brother happened to be working for and then told to me. Dick agreed to take me to see it as he had tried to open it up in 1970 but didn’t have any success.
We will walk you up Sycamore Canyon which is now in the Superstition Wilderness Area to show you the outcropping and discuss the rock formations along with showing you some of the fortifications that Geronimo had.