ASARCO Ray Mine in Kearny, Arizona 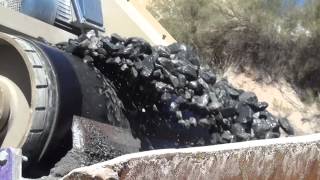 ASARCO’s Ray Mine operation is a 250,000-ton-per-day copper ore open pit mine that produces approximately 100 million pounds of copper each year. ASARCO (American Smelting and Refinery Company) was established in 1899 primarily as a lead and silver smelting and refining company. Today, it is primarily a copper mining, smelting and refining company, and is a wholly-owned subsidiary of Grupo Mexico.
As general manager of the Ray operation, Mike Kotraba is always seeking new ways to keep costs low and improve production throughput. Most recently, the question that plagued him concerned the low-quality copper material that had to be recirculated through the primary SAG (semi-autogenous grinding) mill. What would be the net impact on SAG throughput if the operation could remove the recirculating load from the mill, he wondered.
In less than a month, ASARCO Ray Mine had its answer. Thanks to the use of a KPI-JCI and Astec Mobile Screens SuperStacker, the mine saw increased mill throughput and reduced costs. In the first three months of use, ASARCO has removed approximately 500,000 tons of reject material from the SAG mill circuit, saving the company between $750,000 and $1,000,000. These savings come from: 1) reduced costs (by not crushing and recycling the sub-grade recirculating load); 2) increased SAG throughput (by rejecting the sub-grade recirculating load thereby opening-up additional SAG volume for more fresh feed), and 3) increased copper production (by adding higher grade, fresh feed to the process).