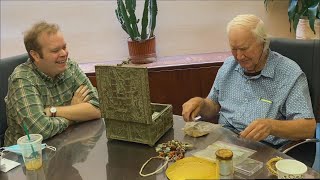 Jack Stuef, 32, a medical student from Michigan, found the famous fortune believed to be worth more than $1 million that Forrest Fenn had left for someone to unearth. A photo of Stuef has emerged delivering the chest to Fenn, the antiques dealer who hid it a decade ago. Stuef’s identity was relieved by Outside Magazine and according to a story in the magazine, he retrieved the chest on Saturday, June 6, in Wyoming.He then drove to Santa Fe, New Mexico, to hand deliver it to Fenn that same day. #InsideEdition